Who is this movie for? 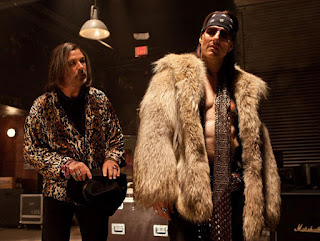 Like it or be indifferent to it (it's hard to hate something so deliberately dopey), the stage musical Rock of Ages knew exactly what it intended and who it was intended for.  It was Mamma Mia for the hair rock crowd, with a borrowed and indifferent plot linking a bunch of familiar hits perfectly suited for singing along, awash in middle-aged nostalgia.  The young people in the story served as surrogates for the audience, who was young 25 and 30 years ago, and the older characters were figures of fun.

The film of Rock of Ages (2012) does not seem to have such certainty.  Whereas people could attach themselves to the abstract surrogates of the young lovers in the stage version, film is always more specific, and the young people are no longer substitutes for the audience, but other, recognizable actors.  (Julianne Hough, specifically is now a veteran of Burlesque and Footloose and better get a job in a non-musical before she becomes unemployable).  We see, in full-color close-up, how young and fresh-faced these kids and they are no longer us.  Now we are the oldsters -- we are burnout Alec Baldwin or trying-to-reclaim-lost-glory Tom Cruise.  Both give superb performances, and both remind us, through their own appearances and our shared history with them, that we are old.  And nobody pays $12 to be reminded that they are older than they ever meant to be.

The other interesting question about the film (and there aren't many) is its narrative conventions.  Traditionally, music in musicals, as derived from the stage took part in the theatrical convention that snogs were heightened speech and that they were experienced by both the singer and the hearer as a heightened experience, but not necessarily as a song.  Song was a conventionalized special type of speech, akin to a character in verse drama launching into a long poetic flight.  The other characters may have felt the thoughts and emotions of the person speaking or singing, but they did not think "Hey- that was a good song" or "Hey - that was a purty poem."  Musicals took place in a parallel universe, or more accurately through a special musical prism which refracted high emotion in the form of music.

One day that convention started to make people uncomfortable.  Who is to say why conventions go in and out of style.  Film is riddled with them, but only some of them are apparent to most viewers.  They are acutely aware of, for instance, narrative cliche, but they refuse to notice that film is made out of bits and pieces of moving images which could not have been captured sequentially in continuous time and do not resemble the way we experience the real world in any way.  (This is excluding long boring art films shot with stationary cameras.)  One set of conventions infuriates people, and others are completely invisible to them.

A-ny-way, people started to think it was funny when film characters began to break into song, presumably because the space they occupy, both in the actual world and in the apparent film world, seemed more "real" to them than the more explicitly symbolic theater.  "People don't really do that."  (Presumably they do engage in high-volume gun battles in the street which have no casualties except for the Bad Guys -- I mean, nobody complains that action films are unrealistic, whereas they are just as stylized as any musical.)  So, since 1972 when Bob Fosse adapted the Broadway show Cabaret in such a way that all the music was what film professors call "diagetic", meaning that the songs are taking place in the world which the characters occupy in the rest of the film, musicals have adopted one of two pretexts for a musical number: (a) that people are performing right here and now in a conventional performance context and that the people present can hear them and are enjoying ; and (b) that the musical number is a sort of fantasy which is only being experienced by the person imagining this musical number.

Some films and shows have it both ways.  Chicago had them both ways at once, in which the events of the character's "real" life were re-imagined by her as performance numbers.  Thus, the songs could be strikingly specific to the story situation, more so than a real performance number would be, and their unreality could be shrugged off as being part of the performance context.

The television show Glee apparently alternates among the conventions.  Mostly, we see the eager children bursting to perform their heartfelt songs which are so coincidentally related to the story situation.   Often the realistic performance context (kids in school clothes in a schoolroom) gives way to an elaborately costumed and staged performance (not to mention processed, compressed and AutoTuned to a fare-the-well).  Since it would be ridiculous to imagine such complex performances being prepared on a weekly basis by high school kids in suburban Ohio, one must presume that the schmancy versions of these songs constitute the children's fantasy of what their number feels like, just the way Snoopy imagines that he really is a World War I flying ace or the way I imagine it's important to maintain this blog.

The other principal use of song in Glee is as inner monologue, as a reflection of a character's inner state.  Traditional theater musicals do this as well, in songs "in one", meaning all the way downstage, with the performer relating directly to the audience.  Dramatically speaking, a play need never define or decide whether this singing is "really" happening.  When Billy Bigelow imagines life with his son -- or his daughter -- in the Soliloquy from Carousel (Hammerstein borrowed the term straight from classical theater), it all takes place in a half-world in which a character sings out loud and strangers seated in front of him hear him and respond and react.  And he is allowed to acknowledge their presence.

Film has no such luxury.  When it does attempt to acknowledge the audience it comes over "theater-y" and stiff.  Buster Keaton was right to rap his knuckles on the glass of the camera lens.  There is a permanent barrier between actor and audience in film, and not just of the lens, but of place and time.  We live in two different "now"s and never the twain shall meet.  So film usually emulates Olivier's Hamlet, beginning the sung monologue with a close-up on the face which is thinking these thoughts.  From time to time the lips may move in synchronization with the music, but they may stop doing so.  Performance energy, which is central to the stage musical, is unnecessary and irrelevant on film.  That energy is provided by camera movement, dynamic staging and editing, rather than the performer's sweat and tears.

Rock of Ages plays it both ways, and the audience's easy acceptance of these two different and perhaps even contradictory conventions of song in narrative may mean that we are finally relaxed about musicals and can accept their artificial interludes in the same way as a kung fu fight, a car chase and other such entertainment elements in the types of films which are put together like fruitcakes; an often undigestible cake which can be tolerated for the periodic bits of candied fruit which are the cake's "raisin d'etre." (Pun intended, so don't e-mail me about misspelling.)

On the other hand, given Rock of Ages's difficulty in finding its audience, perhaps its reception in the theater, positive though it was, is not a significant indicator of anything.
Posted by Lockhart at 12:54 PM