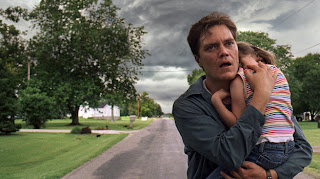 At the end of the first act of A Delicate Balance by Edward Albee, two old friends of the main characters suddenly show up at the house late at night, quite unexpectedly.  The friends simply want to stay.  Why?  They are afraid.  When they are in their own house, they are afraid?  Of what?  They don't know.  So they come to stay, indefinitely.  Later, they leave suddenly, for no apparent reason.

But that was an Important New York play, not genre entertainment.  In genre, specifically "horror", the idea is to induce fear, or at least memories of fear in the viewer.  This usally is accompanied by a certain risibility, either out of the social embarassment inherent in being reminded of our own natural propensity to be afraid, even when it makes sense to be.  Or the audience could be laughing because the movie is laughable, often the case in horror (that is, the film is literally incapable of stirring horror because the conventions have been so terribly flouted-- the thing to be feared is so patently unconvincing that the audience's suspension of disbelief is stretched past the breaking point).

Take Shelter (2011) inverts the horror genre (which Boris Karloff rightly preferred to call "terror").  It does not aspire to induce terror in the viewer (except perhaps as an ancillary effect) but to observe the onset and effect of terror on its protagonist.  It goes so far as to keep the terror vague and unnamed.  It could be alien invasion, severe weather or anxiety attacks.  Or two of those.  Or all of them.  Or none of them.

Some writers might want to analyze the effects in this film, which I find immaterial, or add up and decipher the clues about what Michael Shannon's Curtis is sensing.  The film could be The Birds or Close Encounters ont the one hand or it could be Shock Corridor on the other.  OK, nowhere near as vulgar and crazy as Shock Corridor, but the protagonist could still be crazy.

The real trick the film pulls off is that virtually nothing happens.  Oh, Curtis buries a container in his back yard and gets fired, so there are money problems.  His daughter is deaf and there's some hashing out her education and Curtis's connection to her.  But mostly it's nothing, not even at the dramatic climax of the film.

And yet it plays.  Part of this may be due to Mr. Shannon, who has developed from an offbeat day player to a haunted, virtually Shakespearean leading man (albeit in this case, Shakespearean despite being almost completely inarticulate).  He proves the old saw that essentially films are about faces.  The picture above gives a bit of a hint.

Incidentally, Jessica Chastain has now become, for me, a Don Cheadle Actor.  This category has nothing to do with Mr. Cheadle's talent or his style.  It is simply that Don Cheadle's presence in a film as a fairly reliable guarantee that the film will not be insufferable crap; that it had the potential, at least at the outset, to be a very fine film.  Many, many times it is, but even if it is not, it still repays viewing.  The day Don Cheadle appears in a Transformers movie I will pull my knit hat down over my eyes and sit in the corner, mumbling and rocking and peeling the labels of empty Jack Daniels bottles.  (I hope Mr. Cheadle does not hear about this and does not have a cruel sense of humor.)
Posted by Lockhart at 12:30 PM