Ripped off from the headlines 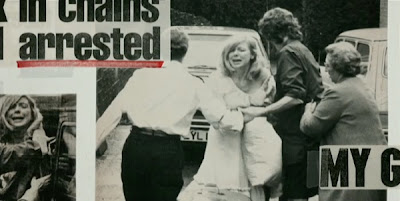 Somebody tell Errol Morris that somebody who saw a couple of movies made a cheesy imitation of a documentary, stuck Errol's name on it and called it Tabloid (2010).

Mr. Morris has two basic modes.  In one he puts two people or groups of people championing competing stories in front of the camera, lets them tell their stories and gently leads the viewer toward the most plausible version of events, sometimes with the aid of carefully identified reeactments, stock footage and shots of artifacts and locations.  In the other mode, he lets amiably odd people ramble on about their fixations, and we are invited to think, "Aren't these eccentrics charming?   Well, it takes all kinds to make a world."  There is no "other side of the story" in such cases -- the whole story is the wacky things these loveable people believe.

Tabloid botches the whole thing.  An idiot-maniac is permitted to drivel on in front of the camera at length with a story so silly and distasteful that you will have to watch the film at home, near a shower or bathtub.  No other perspective is offered, other than the so-called journalists who profited from spreading her delusions across the countryside.  So there is none of the interesting tension of conflicting versions of the story.  We get one, solitary, unitary deranged rendition of a deranged set of facts.

There are small Errol Morris flourishes -- big animated words on the screen, mock-ironic stock footage spliced in, real footage of the subject of the film (you notice how I avoid repeating her name) 35 years ago, younger and slimmer and just as crazy if not crazier.

If your idea of art or entertainment is being locked in a small room with a nut, have at it.  Include me out, thank you.