Don't grow accustomed to your face...

"...I said I'd make a woman and indeed I did," sings Henry Higgins in a reprise of "You Did It" (cutting off the song "Without You") late in the second act of My Fair Lady.  In that context, it was just an obnoxious solipsistic way of dismissing a woman's claim of self-sufficiency, by merely claiming that he had always wanted the woman to be assertive and independent, while in fact he could not tolerate anyone of any gender not bowing to his whim.

In short, it was meant to be funny and it was. 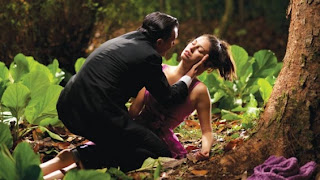 It's not funny and not meant to be in The Skin I Live In (2011) the creepiest and most perverse variation of the Pygmalion myth I've experienced (leaving aside straight-out horror movies, which are usually intentionally risible).  To use a phrase I loath, "SPOILER ALERT."  (I don't bother with this idea because (a) the concept of this blog is to have a conversation with the reader about films, not to review them, and respecting the distributor's marketing plans is not part of the agenda here; and (b) because the idea that the main interest in the narrative is the surprise in being caught up with the twists and turns is a 20th and 21st century perversion of the ancient art of storytelling, which consisted in keeping the listener rapt EVEN THOUGH the listener knew the story, knew all the stories, and wanted to see what you do with it.)

(Continuing this exegesis -- theatergoers do not want Hamlet to come out all different and surprising, and do not want their Mozart piano concertos to have trick endings.  These sorts of demands for endless novelty are, I maintain, MARKETING considerations, NOT artistic ones.  And there is research to show that people enjoy stories better when they already know the ending.  More of this in my next post.)

Luckily, Almodovar understands at the deeper level what he's doing.  The story, which is appalling as any Greek myth, tells of a man who mourns his dead wife by converting his hysterical and suicidal daughter's rapist into a fireproof replica of her.  Take that, Medea!  Represent, Oedipus!  Clearly this is not meant to be accepted as events that could have actually happened at any real time in any real place.  Almodovar signals this with the make-believe production design -- all solid colors, mostly primary, surfaces unblemished, a kitchen with no mark of ever having been used, a lecture hall that looks like it was completed minutes before shooting.  There are no signs or indicators of real life here, of the quotidian details of existence.  This is the stuff of myth, which is the only way Almodovar could get away with it (if only he did).

Two other observations and I think I'm done.  One is that the entire first half hour and the double meaning of the title are virtually a red-herring.  Much footage is devoted to the perfection of flame-proof skin, presumably as a reaction to the protagonist's wife's terrible death in a flaming car accident.  But that ultimately is of no consequence.  That gun that Almodovar puts in the drawer in the first act is never taken out again.  The experimental subject never encounters potential injury by fire, fire is no part of the plot.  Frankly, the details of gender-reassignment are of far more significance.  And when Banderas's boss tells him to stop this line of experimentation, he does, without complaint and without secretly carrying on, like any decent self-respecting mad scientist.

Yes, the title is there because of what the characters do, the guilt they bear, the burdens they carry, all the questions of identity that such a title raises.  But the double meaning it reaches for is by way of a cheat, of a plot situation that is simply grafted onto the story.  That really should have been re-thought.

Finally, I have no idea what Banderas is doing in this movie, other than that he has a history with Almodovar, they helped build each other's careers and there must be a sense of mutual obligation.  Because he is clearly miscast.  What Banderas does is contained fury.  That's his brand.  The script calls for contained madness, a note not within Banderas's range.  There is never a thing to suggest to irrational, or even really the dangerous quality of this character.  In an effort to contain the insanity of the story, Banderas exhibits a calm impassivity which registers as indifference, especially when he casually abandons the experimentation that is supposed to be the premise of the film.  Banderas's face does not yet have the visual complexity to convey two thoughts at once (compared to, for instance, an Anthony Hopkins or a Kevin Spacey), so for most of the film he seems to be merely obeying the script's dictates, without any conviction that there's anything to them.

Almodovar has always wanted to marry insightful drama with scenes of revulsion and horror, but backed to the wall on this film, he seems to have settled for the latter.  Pity the better film lying just under the skin of this one.
Posted by Lockhart at 11:53 AM