Waiting in the wings 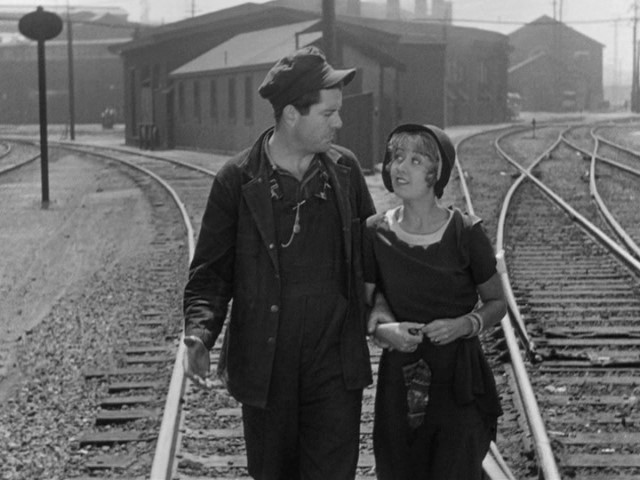 There are three reasons to see Other's Men Women (1931) now in the 21st century: three great talents gaining experience and developing confidence and about to explode on the screen.

One is director William Wellman, whose legendary impatience always lends energy and speed to all his films, but not always narrative or thematic cohesion. His best film prior to this was the silent World War I flying epic, Wings, which no longer looks as good to us as it did to its audiences in 1927 (it is both rambling and repetitive, but unquestionably sincere). Talkies seemed to sap his confidence for a few years, but shortly after this he was to shoot the garter-snapping Night Nurse and the landmark Public Enemy, to which we will return in a moment.

The second is Joan Blondell, seen in this illustration trying to work her wiles on the stolid and rather lumpy Grant Withers. (This guy got a 17-year-old Loretta Young to elope with him? No wonder she got it annulled in less than a year!) Joan was never not sexy and fun, which had the handicap of making her too useful for those qualities. She was a perennial second lead, and only managed to get meatier roles beginning in the mid-1940s. (See her work in Nightmare Alley and as Aunt Sissie in The Tree Grows in Brooklyn.) She doesn't get the guy here--she rarely did, but with Joan, we always enjoy the ride.

Finally, in the smallest role of the three, is James Cagney, who ignores the fact that he is supposed be playing a railroad engineer and interprets the part as if he was playing a tap dancer--he even executes a brief buck and wing as he picks up his date to take her to a dance hall. It is hard to figure why Wellman, in his next picture with Cagney, The Public Enemy, continued to miscast him. In the latter film, he was cast as the dutiful older brother and Eddie Woods as the mad dog gangster, and it was only after filming began that Wellman realized he had to swap actors. It is impossible to understand how Cagney could keep getting cast as the simple, decent button-down fella, when every frame reveals how ready he is to tear off that regular-guy straitjacket and show how special he really is.

Highlight in Other Men's Women: Cagney and Withers are standing on top of a moving train. Cagney is describing a prize fight he has seen the night before. We see an overhead obstruction coming. Nimbly, without forcing it, Cagney demonstrates the fighter's crouch (and Withers follows him) just as steel bars pass inches over their heads, while the conversation never skips a beat. The guy can't stop dancing!

The film really belongs to a past era, and not just because it's all about guys who work on trains. Hero Withers is boarding with his best pal, Regis Toomey, who is married to Mary Astor. When Withers falls in love with Astor (and who wouldn't--she always looked like she had just gotten out of bed and was planning to get back in soon), he not only refuses to put the moves on his best friend's wife--he completely moves out of the house so that no hanky-panky can go on. Naturally, since Withers has been as good and decent as he could be, his best friend gets mad at him and much strife and head trauma ensues.

If Withers had had the sense to stay with Blondell and Wellman had let Cagney either tap dance or shoot somebody--then we would have a picture!
Posted by Lockhart at 11:15 AM