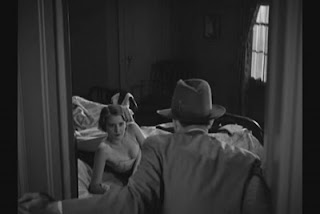 Growing up as I did in the age of Roger Corman, a title like Night Nurse suggests one kind of movie. But the Barbara Stanwyck vehicle Night Nurse (1931) is both more and less racy than a Corman product would have been. There is an exploitative angle, for sure--there are two or three scenes of Stanwyck and Joan Blondell standing around in their lingerie--I was going to say for no good reason, but seeing these ladies in their scanties is reason enough in itself.

But this is exactly the kind of nurse movie you would expect from a guy who was about to direct one of the toughest gangster pictures ever, The Public Enemy. It's fast, it's direct. (The dipsomaniac literally says, "I'm a dipsomaniac and proud of it," in case you hadn't worked that out yourself.) Clark Gable glowers and snarls in order to promote his plan to kill two little heirs so he and his girlfriend can get their money. (I know, it doesn't make any sense to me, either.) But the problem is "fixed" by having Stanwyck's gangster boyfriend kill Gable off, which he does offscreen and without any comment or moral resolution. Maybe that's why Gable decided to be a gangster himself later that year in A Free Soul.

There's a lot of slapping and heaving crockery around in this movie and the odd notion that a starving child can be treated by soaking it in milk. I should have thought opening the kid's trap and putting food in it would be effective. And Stanwyck is sort of a good girl in this one, in contrast to Baby Face (see Sept. 12) and The Miracle Woman, albeit a pretty tough good girl. I suppose that's Joan Blondell's influence. Hotcha!
Posted by Lockhart at 6:53 PM