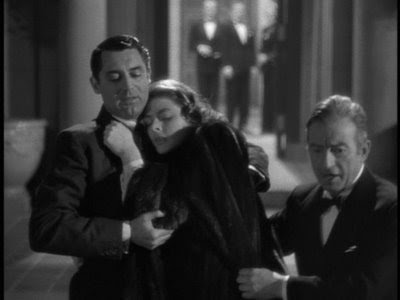 The title reads, "Alfred Hitchcock's Notorious" (1946) and so he is. Perhaps most notably for his numerous kinks and obsessions which remained obscure to his original audiences, but which leap out in plain sight to us today. I'm not just talking about the old chestnut about the chilly blonde being sexier than the Marilyn Monroe type--Hitchcock 'fessed up to that one himself. Nor the fear of authority, which is central to the suspense genre as a whole. (Pro-authority action flicks, like the Bond movies, have to have a streak of silliness to keep themselves from being proto-fascist, like for instance, anything by the neo-Brown Shirt John Milius.)

I'm interested in deeper twists, such as his fear of women, his belief that he is unworthy of him, his obsession with work, until personal identity is subsumed into the work. These ideas inform Notorious (1946), a film I find endlessly fascinating. It is one of the most adult films of its era, and for that reason I have avoided using it in my high school Film Studies class. No, nobody takes their clothes off or curses or uses drugs. But the concerns of the characters are adult concerns--love, sexual fidelity, duty, self-denial in service to that duty. It is an incredibly sexy movie--if you know how to read films of the 1940's. Between censorship and the culturally enforced reticence of the time, matters were not stated, but they were very clear to their audiences. (In fact, audiences came to understand that fade-outs after a kissing scene meant that sex followed, that the Production Code office began to bar all such fade-outs because they were too suggestive. Let me clarify--fading to black was too dirty for American audiences.)

If you watch Notorious carefully, you see that Cary Grant's character has fallen in love with the Bergman character almost as soon as she has fallen. But as soon as he learns that he must push her into another man's bed for the sake of the nation, he allows her to see him as cold, indifferent, detached. Apologetic, to be sure, because everyone recognizes there is something inherently indecent about the entire mission. But Grant acts as though he were not personally affected. And of course, we learn at the end that he is completely torn up.

As is Claude Rains's character, who is the most tragic of all. He gave his love wholeheartedly and sincerely and he is the one most truly betrayed, not Bergman and certainly not Grant. But Hitchcock and screenwriter Ben Hecht cut off sympathy in two ways. One is easy--he's a Nazi who wants to make a bomb; the other is subtler: his pathetic cry for help at the end, for Grant to shelter him from the wrath of his Nazi associates. We know that Grant, put in the same position, would accept his fate uncomplainingly, just as he accepted the necessity to pimp the woman he loves for his country.

And this is where this quintessential Hitchcock film makes tangential contact with the director we will be addressing next in Film Studies: Howard Hawks. For Hawks, duty and loyalty come first. Not honor, in the Asian or Germanic sense, like defending a family or a country. It's more like honoring one's own promises, one's own commitments. Maybe even if you don't quite believe in them anymore. As Sam Spade says in The Maltese Falcon (both novel and film) "When a man's partner is killed, he's supposed to do something about it. It doesn't make any difference what you thought of him. He was your partner and you're supposed to do something about it." There is beautiful stoicism in Notorious that we don't find in the neurotic Vertigo, The Birds or Marnie in which Hitchcock let his neuroses have full rein. Because it is only when Grant's character wonder what kind of man he could be to do what he is doing, that he is really and truly a man.
Posted by Lockhart at 11:16 AM