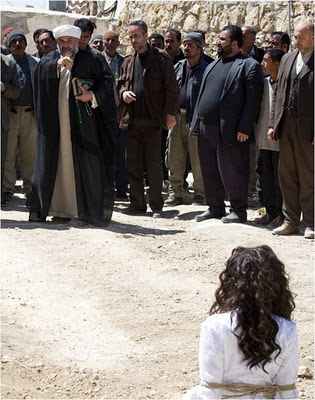 You can't complain that the title is misleading. The Stoning of Soraya M (2008) is about just that. It's not about her hard life, or the whispering campaign against her or the treachery of her husband or the powerless of women in post-revolutionary Iran, although all those elements are touched in the first hour of the film, which might be considered a preamble to the main event.

Because at around the one-hour mark of the film, we know that Soraya is going to be stoned to death in just a few minutes and nothing can change that. And that fact may make this film the hardest film to watch in many years. Not hard because it is not engaging, but hard like watching videos of 9/11 is hard.

Viewed purely as aesthetics, the film is an admirable example of literary adaptation, simply because what it does in its second hour can only be done on film. I have not read the novel the film is based on--it is certainly widely and highly praised. But writer Betsy Giffen Nowrasteh and director and co-writer Cyrus Nowrasteh have lit upon purely cinematic story-telling solution to the central problem of the story: the pivotal event is sickening, horrifying and susceptible to melodrama.

Whereas other filmmakers focus on melodrama and suspense (and this is what I had expected in this case) as to whether and how Soraya will be found guilty on trumped-up charges, Soraya M reveals the plot at once and establishes its inevitability. There is no question that this woman's husband is in too great a hurry to marry his blond girlfriend, and that it is far easier to get a married woman publicly executed than to obtain a divorce.

Finally, the film gets to the heart of the matter and does what only film can do. If you have seen stonings as staged in other films, you have no idea what happens. I thought, as I saw the men digging a hole, that she will stand in the hole, dodging the stones until she can no longer do so. No. The victim is placed in the hole, and buried from the waist up (see illustration above). The arms are bound, so the victim is completely immobilized, body and arms and helpless to defend herself from the rocks, so eagerly gathered by small boys seeking excitement. In Soraya's case, the first stone is to be thrown by her father, who fails not for lack of will, but lack of arm. The effort wavers, and then the "aggrieved" husband takes up a stone, and the onslaught begins.

You think the camera will turn away--it will play out the scene on the faces of the witnesses, or of the women listening to it all from a safe distance. No again. Nowrasteh stays there, right there, as we see every rock hit face and head. This is, of course, a fiction film with actors and there was some film trickery involved, but you don't think of that as the scene unfolds. You apparently see a woman stoned to death from beginning to end.

There is a lot of idiotic criticism of the film, calling it heavy-handed, propagandistic and one-sided. These critics are all American men, mostly from the South and Middle West. None of them suggest what the "other" side, the "fair and balanced" side of a story of a person being stoned to death would be. The facts of Soraya's case ultimately don't matter, which is why I grateful the filmmakers didn't dwell on them. What matters is this. It's the 21st century and stoning people to death--by ordinary citizens--is still a legal punishment.

My write-up here will probably discourage a lot of people from seeing the film. I hope not. There is a lot of good filmmaking, and a great deal of courage from everyone involved. The pivotal scene is very hard to watch, but not physically nauseating as in a cheap horror film; it is horrifying to the mind and spirit, but ultimately edifying. One can no longer say about such practices, "Well, that's just their way there." It is better to be forced to know the truth.

Leavening the film is the action of the women as a community. Early in the story, we see Soraya protecting the property of a widower whose wife's possessions are snatched up by greedy neighbors (a choice which brings her trouble later). Later, we see Soraya's aunt (who did her best to protect her) taking charge of Soraya's daughters (the sons will go with the father) and the circle of women drawing around them to shield the from the horror. Over and over, every society tells the story; how men enter the wilderness and women bring the family, and with it decency, kindness and moral order.

Just not enough moral order, evidently.
Posted by Lockhart at 10:09 AM