Under the definition "sophomoric" 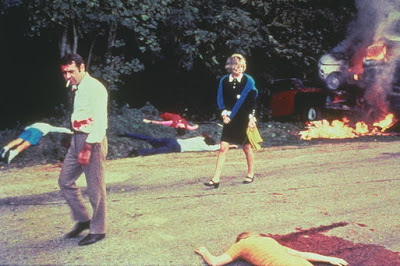 I haven't seen many films by Godard, but I've stumbled over a lot of writing about him. Godard is a filmmaker about whose films it's better to write and analyze than to actually see. The fact that self-identifying intellectuals see them as important and ground-breaking speaks to the bankruptcy of modern intellectual life.

Godard is whining about the same banalities of the petit-bougeois life that his ancestors were doing 250 years earlier. And none of it is remarkably different than what most adolescents spew between the ages of 16 and 19. It's just that the rest of us grow up and develop a more balanced life (the adolescents would say we "sold out"--I should only have been so lucky as to have sold out), while intellectuals like Godard stay frozen.

Here are the themes laid out in Godard's best-known polemical film, Weekend (1967) (Breathless is better known and more popular, but it does not have a coherent political program): capitalism and the middle class worship possessions; materialism is soul-destroying; consumerism is death-obsessed; all of the above destroy relationships between people; we need to recognize our common interests in the class struggle; collective action may not work because of human needs and jealousies.

Is any of this news to you? It was to me when I was a teenager. And I still deplore the emptiness of capitalism and materialism to deliver true happiness, peace or understanding, but I'm no longer indignant about it, nor convinced that I have made an utterly unique discovery. This is the journey every generation makes, and how we accomodate those discoveries defines our era. I suppose in 1967, this was au courant, but it seems especially juvenile today.

Nonetheless, Weekend is mostly arresting to look at, until its last third when it dissolves into a series of long Marxist monologues that seem at first to be satirizing left-wing extremism, until it dawns on the viewer that Godard means it, and that he is just another crank on the corner, spewing that 9/11 was a goverment hoax, like the moon landing. But before that, there is the famous traffic jam, the casual and unexplained burning wrecks, the nursery rhyme characters, the burlesque murders, one of which seems to be burlesquing Psycho and a lot of fun collegiate nihilistic hijinks. As a prank, Weekend can be enjoyed as a bit of juvenalia. But as an art object to be enjoyed, savored and delved for its depth of expression--I leave that to the most trite and shallow people in our society today--college professors and film reviewers.
Posted by Lockhart at 3:36 PM