What do we mean by that? 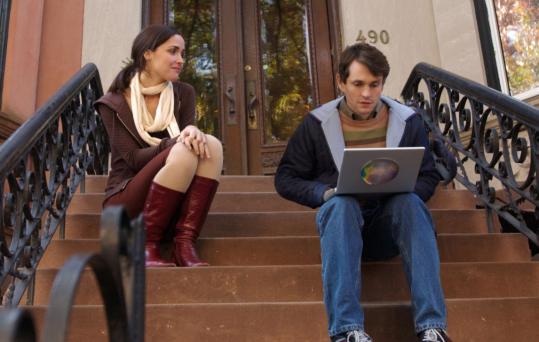 What is really remarkable about Adam (2009) is not merely that a touching and entertaining romance can be built around Asperger syndrome, but the apparently effortless command and mastery by which writer-director Max Mayer employs Asperger as a metaphor for a whole range of adult relationships, and indeed, for the act of watching film. Before I go on, I need to tell you that this is not a "disease of the week" movie, or a plea for special understanding of a misunderstood population. It's simply a story about relationships in which one person has an inherent difficulty with relationships--not much different than all those movies about slovenly frat boys who don't understand women. Adam just doesn't understand anybody. And there is not a single dull or redundant moment in this highly engaging movie, beautifully shot by Seamus Tierney. (I was stunned when I learned this film was shot on hi-def video, not 35mm. The images are crisp and evocative, nothing like the dull, smeary look of Cold Souls.)

Many of the salient characteristics are Aspergers are phases that we all go through, especially as teenagers. Inability to look people in the eye, a low level of empathy (this is actually physically developing as the pre-frontal lobe is still growing and not completed until the late teens), difficulty understanding non-verbal communication, or indirect verbal modes such as irony and sarcasm--all of these can be puzzling to 14-17 year-olds. There are films from Classical Hollywood I have learned to shy away from in a high school film course, not because material is offensive or upsetting, but simply too difficult to decipher. Social and censorship codes of the 30s, 40s and 50s made it impossible to discuss some matters directly. I found myself stopping the film Casablanca to explain that when the young Bulgarian bride asks Rick what he would think of someone who does a bad thing for a good reason, she is asking him if she should sleep with Renault in order to get an exit visa for herself and her husband. So many films of this era--To Have and Have Not, Notorious, Gilda are reeking with sex which a teenager cannot detect because no one removes any clothing or says a dirty word.

But indirection, compression and the use of verbal and visual signals is often right smack at the heart of filmmaking. Look at the beginning of Adam. We see a young man at a funeral. We see him return to an overly-large apartment. He goes to a calendar marked with "Dad's Chores" and "Adam's Chores" and strikes out "Dad's Chores." Close-up on an American flag folded in a triangle, shoved onto a shelf. We know this young man has lost the father he lives with, that he is methodical and that the father was a veteran. All this in the space of seconds without dialogue. I wonder how readily someone with Aspergers would grasp the unspoken exposition of this very film.

And then there are relationships. How much do we ever understand what is in another's head? (This is one of my "commercials" for teaching literature in school--it is one of the few ways to approach the inside of another person's mind.) We try, we guess, we make mistakes, we ask forgiveness (or don't), we are forgiven (or not) and the success of relationships is often measurable by our tolerance for each other's stumbles.

It is hard to describe how satisfying and sure-footed this film is. Adam is not a saint, and not possessed of mystical knowledge. (Adam even makes a deft Forrest Gump joke, which takes his girlfriend a moment to recognize, so rare are his wisecracks.) Scenes are visually well-composed, the action well designed, beginning and ending at the right spot. One might take issue with the subplot, which has to do with our tolerance for deception from others, but I think it sheds light on the main thread of the story.

Also I liked the metaphoric use of children's stories, particular Le Petit Prince and The Emperor's New Clothes, which ties in nicely with Rose Byrne's character's desire to become a children's author; this in turn neatly wraps up the conclusion, which is satisfying without being pat. It is hard to believe someone with such a meager film resume can make something with such clarity, control and confidence.

One little side note--that satisfying conclusion is the result of studio involvement and focus groups, which helped pinpoint some audience dissatisfaction with the original ending. Hats off to Fox Searchlight for acquiring and distributing the film, but also helping make a positive artistic contribution.
Posted by Lockhart at 8:33 AM