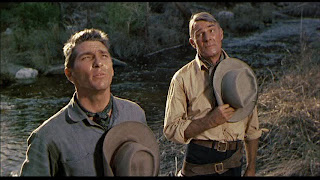 We think of the spaghetti westerns of the 1960's as being more cynical and ironic than the classic American exemplars that preceded them, but one can see the roots of this development throughout the 1950's. Most famously, there is Vera Cruz, about some amoral mercenaries played by Burt Lancaster and Gary Cooper. Gasp! Gary Cooper! Good old Gary Cooper...a mercenary! Heavens!

Surely, Randolph Scott is always upright and true-blue. Well, not always. Buchanan Rides Alone (1958) finds Scott not amoral, but certainly happy-go-lucky, and looking askance at the law, at least as it is represented in the dirty little town he has found himself in. (It has that in common with its predecessor, Decision at Sundown.) But where Sundown is earnest, Buchanan is cynical, with a story reminiscent of Yojimbo and the Fistful of Dollars films, in which the protagonist is ratcheted back and forth between rival gangs (these ones are members of the same family).

A number of writers on this film have ascribed much humor to it. I don't see as much as they do, although there is a wonderful lazy-larricky performance by L.Q. Jones. In the scene pictured above, Jones and Scott botch the burial of a would-be betrayer, whose body they have had to put up in a tree to avoid the varmints around and the swamp below. Jones's intended eulogy is laden with all sorts of unflattering details about the departed, interrupted by a harrumph from Scott.

But the film winds up with far too high a body count to really count as a comedy--it is not a black comedy. But it is odd and quirky, and refreshing for those who have tired of Western cliches. You can watch it yourself online by clicking the illustration above.
Posted by Lockhart at 12:41 PM