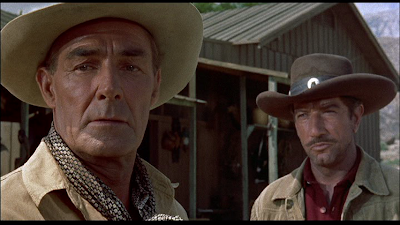 The Western has attracted several star & director teams, starting with Wayne & Ford, (and Wayne & Hawks) Stewart & Mann, and even Eastwood & Leone and Eastwood & Siegel (although the latter produced as many cop thrillers as Westerns). The most recent pairing to enter the auteurist pantheon is the seven Westerns starring Randolph Scott (who had already been a star for 25 years) directed by Budd Boetticher between 1956 and 1960. I've just viewed the second one made, the first currently available in home video, a tense, tight chamber piece mysteriously called The Tall T (1957). (Literally mysteriously-- there is no evident explanation for that title from anything in the film, or indeed, the Elmore Leonard story it is based on, which was called "The Captives.")

As is always mentioned, Boetticher learned bullfighting as a young man, but the reason it's always mentioned, is that it seems to have informed his entire approach to storytelling--the idea of the inescapable test of will and nerve, the man in the arena, as Teddy Roosevelt would have it.

whose face is marred by dust and sweat and blood; who strives valiantly; who errs, who comes short again and again, because there is no effort without error and shortcoming; but who does actually strive to do the deeds...

In The Tall T the arena has a physical representation, in the form of the cramped space at the base of an outcropping of rocks sheltering a small shack in which the film spends its last two-thirds. Where so many Westerns make use of the vast expanses--Ford and Monument Valley, Stewart riding across all sorts of wastelands in search of justice or vengeance, Boetticher ratchets everything down to a space that could fit on a stage in a theater.

But by then you already knew this Western was different because **SPOILER ALERT**, 28 minutes into the picture, he KILLS OFF THE COMIC RELIEF, in this case the craggy Arthur Hunnicutt (who seems like Walter Brennan as a college professor who dropped out of the system). Perhaps you have to know this genre well to know what a radical thing this is. The film starts off, pleasant and pastoral, clearly a Saturday-afternoon movie, as genial sunburned Randoph Scott greets a little boy (representing much of the potential audience) and his goodnatured dad at the coach station. They too, will be killed by the baddies--in fact, even before funny old Arthur Hunnicutt. Nearly all the people that our hero is friendly with and can rely on--all the stable welcoming touchstones in his small circle are gone. Don't know about you, but I think that's going to push a man to the edge.

The next thing that is striking about this movie is the warm, seductive Richard Boone as the villain. Not warm and seductive like an oily conman. A genuinely likeable guy who never actually shoots any of the good guys. He has too juvenile delinquent psychos to do that. Boone spends most of the movie trying to cuddle up to Randolph Scott, trying to get Scott to like him, trying to show how he is just like Scott.

Randolph Scott is not a fashionable cult movie star (except to cinema cuckoos who've delved deep into these Scott-Boetticher movies). John Wayne was more colorful and varied, more given to flawed heroes, Gary Cooper sexier, James Stewart more neurotic. Randolph Scott was just a stand-up Southern gentleman, and thus the perfect representative of our American ideals to put to the test in confrontations with evil. His taciturnity is not an affectation, or a suggestion that he was simple, but simply a measure of reserve that originates not just from good manners, but from a genuine conviction that the less said, the better. (This is why it's good for Scott's antagonists, like Boone, to be chatty.) Incidentally, because he was born in Virginia, film writers are always talking about his Virginia accent, but anyone who knows the area recognizes the substitution of "oi" for "er" as pure North Carolina, which is where Scott grew up.

So Boetticher and screenwriter Burt Kennedy have cleared away everything extraneous, and the stage is set for a confrontation between good and evil. And unlike other Western heroes, Scott has already admitted he is afraid and he has no plan. Maureen O'Sullivan, the other surviving hostage passes briefly through hysteria, but Scott coaxes her out of it by getting her to acknowledge her own self-worth, an assessment he reinforces by planting a big one right on the kisser. Incidentally, in deference to both the gentleman Randolph Scott and the boys in the audiences who don't go for all that mushy stuff, that one kiss suffices--and given its fervor, it damn well ought to.

The final confrontation rests on one piece of knowledge the viewer must have about the code of Classical Westerns. The good guy will Never Shoot Anyone In The Back, Even the Baddest of Bad Guys. Naturally, this boxes our hero in; and the baddie would have gotten away scot-free, if not done in by his own greedy impulse. Scott does what he has to, but in sorrow, not in anger. Then he tells Maureen it's going to be a good day, and so I think perhaps it will be.

The difficult thing about the Scott-Boetticher Westerns is that none of them qualify as all-time great films, or even all-time great Westerns. But they are all solidly built, sure, specific, drawn from character, and always dealing with clear moral dilemmas and moral tests. It is as a group they are significant. It's a bit like trying to identify the one great Chopin etude or the single great Raymond Carver story. It's not any one of the works, but the totality which shows a clear world view clearly expressed.

Looking forward to seeing and writing about the next one soon.
Posted by Lockhart at 8:10 PM