The Dead Body In The Pool In The Beautiful Rented Villa

A Bigger Splash (2015) direted by Luca Gaudigno is like his superior I Am Love an exploration of the lives of people with too much time on their hands.  Splash is much, much slighter, a mere improvisation with a premise of stunning predictability. 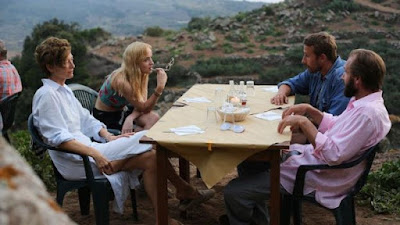 Of course, that is probably immaterial to Mr. Guadigno.  We Americans preach narrative economy above all, and drive headlong from story point to story point.  Texture is just for cinematographers or post-production sound mixers.  But like most European filmmakers, Mr. Guadigno is not afraid to slow down and let the rhythms of life flow by, which makes this film about 20-25 minutes longer than it would be under an American film director.

And then you would have lost one of the strangest and most interesting grace notes of the film.  I hope it's not too much of a spoiler to learn that one of the four principal characters pictured above dies in a pool before the film is over.  In an American picture, we would barrel ahead to the interrogations, the unanswered questions, the betrayals, etc., etc.  But we are in Italy, and this is a rented house.  And the film takes its time to show just how unpleasant and uncomfortable it would be to have someone die in the pool of your beautiful rented villa in Italy.  The uniformed policemen come and put up some very tatty crime scene tape.  Then the pool must be emptied, and that takes time.  A lot of time.  Time enough that one can go down to the police station and back and it's still not quite done and the body has still not been extricated.  The whole matter is just ugly and nasty and even if the dead person in the pool wasn't close to you, it still would throw an awful shadow over your vacation, as if someone had thrown sewage into the wine barrels.

I don't think many American filmmakers would have stopped to note that.  They want to focus on who and how and how that makes the protagonists feel, but that approach would have missed the comical upbeat at the end of the movie, in which the police chief insists on getting an autograph from vacationing rock star Tilda Swinton in the middle of an absolute downpour.  Does that explain anything?  No, but it helps make A Bigger Splash just a bit more special than it would have been.
Posted by Lockhart at 3:31 PM