Appealing to all the senses

Most Americans don't watch enough foreign films. I say that not because I'm a snob or I think you should be one, but if you're a film buff, watching a film in another language opens you up to the purest idioms of film, unencumbered by either the felicities or the clunkiness of language, and the distraction of jokes and flippancy. It's closer to watching silent film, but better, and yes, there's a synchronized music score, but more importantly, even if one doesn't understand each word as it is coming out, one can hear the inflections, the rhythms, the timbre of the speaking voice, coupled with the expressions of the face, the tilt of the head, the roll of a shoulder which convey the speaker's meaning at a deeper and truer level than the words selected.

And I Am Love (2010) isn't about talk very much, anyway. There are sights and sounds, sure, but I can't think of another film that endeavors to evoke smell, taste and touch so thoroughly as this. I Am Love will surely be remembered as the film in which a woman had a virtual orgasm and fell in love upon biting into a prawn. I mean, this was some terrific prawn. And the thing is, this woman did not expect to fall in love. She didn't want to fall in love. She had a husband and a family. A big family. A big rich family (her husband's). There was no good reason to fall in love except for this fantastic prawn.

I Am Love is one of the most sensual movies it is possible to see with your eyeballs. It is a film of textures, of surfaces, of warmth and cold, of brisk mountain air and seaside breezes, of flavors, some dark, some pungent, of the touch of fingers, a massage, a haircut, of lying in the tall grass with warm sun on top and sharp jabs of long grass on the bottom. That feeling is--I presume--intensified by having to rely on subtitles to follow the relatively minimal dialogue. And to complete one's verbal disorientation, Tilda Swinton speaks Italian with a Russian accent, as she is playing an emigre. In one scene it is evident that her character does not understand English! How completely appropriate then, that her character turns away from the seemingly obvious advantages of having married into a wealthy and prestigious Milanese family, to a romance with a humble chef, whose mode of living embodies all those sensual pleasures.

You cannot write about I Am Love without talking about the exciting and surprisingly suitable score from the works of concert composer John Adams. Adams, with Phillip Glass is probably our most influential composer today. He was grouped with Adams as a minimalist, for his accompaniments often rely on simply triadic harmonies, rejecting the harmonic density of mid-20th century music. But Adams has a gift for melody and development of form that Glass has not chosen to explore, and he is our best and most interesting opera composer alive. If you haven't heard his song-cycle/music I Was Looking At The Ceiling and Then I Saw The Sky is a neglected masterpiece. Go seek it out. You won't be sorry.

Adams has never licensed his music for work in film before, and did not write anything especially for the film. Instead the music was culled from his recorded catalog, and sequences were even written, shot and edited with pre-selected music in mind, most notably a sequence in which Swinton's character sort-of stalks her lover-to-be (who is a friend of her son's) through the streets of San Remo, finding herself in a Russian Orthodox Church, where she involuntarily stumbles onto her former self. The music both chugs (like the fabric mills which are the basis of the family fortune) and sings (like the souls of the lovers). If this movie can't make you want to go out and eat gourmet Italian food, it should make you seek out the work of John Adams.

There are a few ways a story of a wealthy middle-aged woman going off with her young lover can go. It can be a super-charged, rediscovering passion story like a Diane Lane movie, it can be a story of regret and despair--separation from her children and hurting her former spouse. And indeed there is tragedy in the story, but it is incidental to the main motion of the narrative, and in a way, releases Swinton's character to embrace her new path. The result is not melodramatic or romance, nor tragedy, but the difficult process of being reborn, of embarking a new life with no promises, no guarantees, but new hope of living one's true nature.

I try to refrain from straight-on reviewing or recommendations, but I Am Love, co-written and directed by Luca Guadagnino, is easily one of the best films of 2010 and I couldn't get to the end of the year without saying so. I am sorry I was not aware of it during its theatrical run and didn't see it on a big screen. If you do seek it out, try to watch it on a large monitor or projected and be sure to run the sound through a decent audio system. This movie goes straight past the intellect and goes straight for the senses like nothing I've seen. 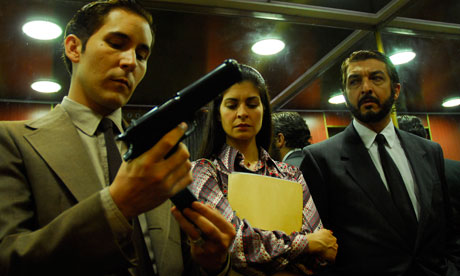 In similar fashion, The Secret In Their Eyes (2009), last year's Academy Award winner for Best Foreign Language Film, looks as though it's going to be a movie for the brain, but goes instead for the heart. It begins like an Argentinian version of TV shows like Law and Order or House, both programs that co-writer, director and editor Juan José Camapanella has worked on. A retired investigator is revisiting a case from 20 years before, but what is being revisited is not just a case, but the life lived prosecuting all those cases, and the opportunities lost or disregarded along the way. In particular, he is reflecting on The Girl That Got Away, his superior at work, in social class and in education, who married suitably and had a family. Now they re-meet to discuss his investigation into this old, dead case and discovers things may not be as old and dead as he thought they were.

The secret of the film is in its titles. The clues are not bits of carpet fibre and DNA. They are looks between the adoring and the adored, returned or not. There is a beautiful echo early in the film, when the investigator intuits the perpetrator of a violent crime by the look he is giving the victim in an old photograph. Only a few minutes later, we seem the same investigator in another old photo, giving the same look to his unobtainable adored. The picture above is a vivid demonstration of what this film does so well. The investigators have identified the violent offender, Gómez, but he has been released because he is a hired killer useful to the Peron regime (in power at the time). The prosecutors learn they have been bested and get on the elevator. A moment later, Gómez boards the elevator. Not a word is exchanged. Gómez loads and checks his gun. The threat is all the more undeniable for having remained verbally unstated. It is like the thriller film's equivalent to a Lubitsch moment.

One of the pleasures of this film is that everything is of a piece: the "top story", the crime investigation and the "under story", the lost romance or organically intertwined. The low-key, amber-toned cinematography, understated music score and Campanella's own crisp editing all fit together as if conceived all at once in a single burst of creativity. It is a film of discretion, of understatement, of respect for its audience, confident that the audience will put together the pieces of both stories and see the connections without being whacked over the head with them. It is a lean-forward, not a sit-back, film. Lead Roberto Darin reminds me of Joe Mategna, with even more soulful eyes, appropriate for a film about seeing.

The Dragon Tattoo series, Let The Right One In and The Secret In Their Eyes demonstrate (if it needed demonstrating) that a foreign language film can be a high-quality, relatively conventional commercial and accessible film. It need not be either experimental and off-putting or derivative and schlocky. All these films will receive (or have received) American remakes. Don't wait for them. Check out the originals. The week between the holidays is a great time for cocooning with movies. Put some foreign language films on your list. It's true that if your eyelids droop, and you miss a subtitle or two, you might feel lost. But have a sip of coffee and stay with it. Your eyes, and perhaps your other sensory organs, will thank you.
Posted by Lockhart at 10:29 AM