I think it was Frank Langella's fault. Vampires had been minding their own business, in sort of semi-retirement in the 50s, 60s and 70s, when Bela Lugosi was a campy joke. Then along comes Frank Langella in a Broadway revival of the play version of Dracula in the fall of 1977 and instead of foreign and creepy, he's tall, handsome and seductive. (Don't consult the film version of that production--it's an unfocused mess.)

Soon everybody goes wacky for vampires, especially Anne Rice, who starts making up new rules for vampires and even starts changing the rules. Well, then it was Katy-bar-the-door, anything goes and now we have got vampires walking around in broad daylight being sparkly. Bleeachh! The word vampire has lost any fixed meaning anymore, which might be why people interested in real thrills have migrated over to zombies and werewolves.

In fact the family of mutant redneck vampires in Near Dark (1987). To its credit, its only meant to be fast, cheap fun-genre flick, so there are only three or four things you need to know about Near Dark. First, it's directed by Kathryn Bigelow of Hurt Locker fame, who specializes in stories about people who bond due to their isolation and even ostracism. She can be fearless this way, even daring to make a film about the most disgusting and repellent outcasts in our society, surfers. Second, Near Dark is a festival for those people of the age group to be nostalgic about 80s films. It has the bad hair, bad clothes and bad music that were endemic to the era. There are people who enjoy such things. There are also people who set fire to their pets.

Third, it's one of the earliest films I can remember that suggests that a vampire might be your cool boyfriend. Dracula was never going to be your boyfriend. A hot one-night stand, sure, but never your steady, who lives in the house over the next block. I wonder if Stephanie Meyer, who was 14 when this film came out, wasn't permanently warped by it. Fourth, it is the only vampire movie I know of where somebody got un-vampired. Sure, Mina in Dracula got part-vampired, but they saved her before she went all the way. Adrian Pasdar gets all better, which suggests that vampirism might just be an adolescent phase, curable with a full blood transfusion. (I wonder what other adolescent phases could be cured that way.)

Fifth (did I say there were three or four things?), this is the only film I know of in which Bill Pullman ever does anything interesting in front of a camera. Up until now, I thought he possessed some version of Harry Potter's invisibility cloak, since he always seemed to disappear into the scenery behind him with his sheer mind-numbing boringness. But in Near Dark, Pullman is the mean psycho redneck in the family of rednecks, and I must admit it, he chews a pretty impressive serving of scenery. If someone makes a compilation of crazy-guy-wastes-an-entire-bar sequences, they have to include the one from this picture.

The one thing Near Dark is uninterested in is using vampires as a metaphor. They are just straight-on badasses out for a bad time, and willing to share it. Let The Right One In (20 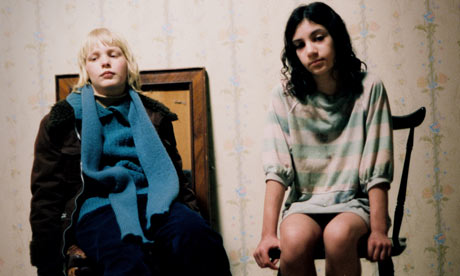 08) leans a bit more onto the metaphoric side, but wears it lightly. Where Near Dark is a romp, Let The Right One In is genuinely creepy, and unafraid to deliver one of the best horror-film come-uppances to one of the bully-villains in the history of film. (To those of you who've seen it, I'm talking about the scene in the swimming pool toward the end of the film.)

But there is, admittedly, something more on this film's mind than good clean scares. The characters are adolescent, in the very earliest stages of puberty, and all vampire stories are, to some extent, about fear of sex, and of the surrender that sex seems to require. Here we are as 12-year-olds, finally figuring out just who we are and defining our identity in contrast with the rest of the world, and now we are expected to learn how to merge our self and even our soul into that of our partner. It's not fair!

Also addressed in this film is bullying, parental neglect, wandering gender identity, being a misfit, and just how bleak and awful winter in Sweden is, especially when you live in nasty, cheaply-built, Soviet-bloc style apartments. If it were me, it would be either suicide or vampirism. It's hard to say which would be worse -- being hung upside down from a tree until all your blood runs into a jug or trying to survive the winter. A vampire attack could be sweet relief. Or at least a novelty, something to talk about until April.

It may hearten some people to know in this tough economy that there seems to be a steady position of vampire helper. Some of the story of Let The Right One In has to do with transitioning from one helper to another. A word to the wise -- you might not be gaining a new girlfriend or boyfriend -- they may just be sizing you up to become their new vampire helper. Still, for the boy in the story, it's better than being a Swedish middle schooler. (In once scene a teacher reads aloud to a class of eighth-graders from a book. When she is done, she dismisses them and they leave in a quiet and orderly fashion. There was no bell, the students were all awake and there was no backchatter from them. From this we can conclude that this is not a horror film at all but some kind of fairy-tale fantasy movie from someone's wild imagination.)

I'm kidding a lot, but the film really does cast a wonderful spell and cleverly mingles horror and sexual panic. Special effects are used sparingly but utterly convincingly, especially as we see the effects of a horrific accident with fire and the death of the vampire's first helper. Keep your eyes open during the hospital sequence. The nurse-receptionist walks outside into the winter night and we see her in the foreground and the shadowy face of the hospital in the background. Watch the background, not the foreground, and see one of the niftiest effects in the history of the genre. I stopped the disc and ran it over a few times to enjoy it.

At the end of the film, the principal characters have agreed to go on together, notwithstanding the horrors yet to come. This confirms my feeling that while Peter Pan ends as a horror story, the victim trapped perpetually as an adolescent (although this would not prevent him from running a Fortune 500 company or starting a war in a Middle Eastern country), vampire stories are (or should be) rich and truthful children's tales.
Posted by Lockhart at 8:35 AM