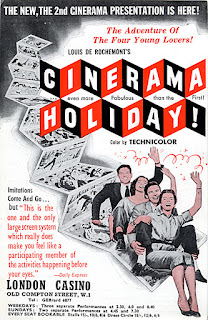 I saw two films recently -- neither film was released recently, but I experienced them that way, within a proximity of weeks, and although their intentions were utterly apposite, one to entertain, the other to inform, they seemed to me to both be attempting to create an immersive experience on film.  That one failed and the other succeeded and the means by which they did that seem worth examining.

The first was Cinerama Holiday (1955) one of the original feature-length films designed to demonstrate the three-camera, three-projector Cinerama format, develop and audience and a a demand and possibly suggest to filmmakers that what might be seen as a gimmick might have narrative possibilities.  The film has been restored for Blu-ray and evidently does the best it can to simulate that overwhelming experience in the home setting.  Actually, the photography and sound are still impressive.  What prevents it from becoming overwhelming is the overall mundanity and lack of imagination in the design of the film.

The content is simply two intercut travelogues, representing a young American's trip through Europe, and a young Swiss couple's trip across America.  Thankfully, there is no phony story cooked up, no chase, no lost passports or jewelry, no getting caught up in foreign intrigue.  There is a certain goofy naive integrity to the whole Cinerama project, which probably inspired the hiring of one of the squarest of the square filmmakers, Louis DeRochemont, creator of The March of Time to execute CH.  After all, the financiers didn't want anything "extra."  They just wanted to show the world how awesome Cinerama was, with no other frills or furbelows.

Cinerama projects at about a 2.75 ratio, but on an enormous screen that was often 40 feet high and about 110 feet wide.  If you sat inside the curve, the projected picture could occupy your entire peripheral vision.  You were literally inside the picture.  This was augmented by super-duper-multi-stereo recording, which must have been pretty startling to mid-50s filmgoers (remember home stereo records didn't arrive until 1958) and still sounds pretty good, especially in the field recordings of actual sounds, such as the bobsled run and the hiss of skis on snow.  The approach is to envelop, surround and dominate the viewer, reduce him or her to a state of helpless surrender to the sheer scale of this form of filmmaking.

(In home video, the picture is deliberately distorted in a "Smile Box" as show in this video, to simulate in two dimensions the look of a huge curved screen.)

It's really not too bad -- the sheer novelty holds the interest for most of the two hours, although some of the scenes of the country fair in Vermont hardly justify this kind of spectacular approach, and their are interludes that lag.  Still, to blow up what is ordinarily a 10-minute feature before the film, the travelogue, and make it a feature attraction has its own sort of audaciousness.

But you can't call this a moving or an emotional experience.  And strangely, it's not really that immersive, at least not in home video.

On the other hand, the winner of the Academy Award for Best Foreign Language Film of 2015, Son of Saul, takes what might be called the reductive approach to immersion.  Released in Academy ratio, that is commonly known as 4:3 or 1:37, the camera doggedly follows a Sonderkommando at Auschwitz carrying out his hellish duties in a hellish environment.  When I say follow, I mean follow.  Probably two-thirds of the film is a shot of his upper back and shoulders.  The camera uses a very short focal length, which means that nearly everything except that which is very close is out of focus.  It is hard to make out what is going on, which at times is a mercy, especially in the most ghoulish and horrific parts of the story.

Conversely, the soundtrack is rich and complex, if just as incomprehensible.  I am told eight languages are heard, or rather barked, languages of captors and the captured carrying out their literally insane duties.  In the clip I've embedded here, you can see just what a confusing and relentless existence this is.

And yet, better than any documentary I've seen, any dramatic film from Schindler's List to Europa Europa to Fateless to The Boy In The Striped Pajamas, etc., etc., Son of Saul conveys the feeling of being inside this bizarre and historically unparalleled phenomenon.  There is no solemn music, no extended speeches (barely any complete sentences in the entire film), no musing on the meaning, no plea for help or understanding or anything except a request that a boy's body not be burned, so that Saul, who believes the boy to be his son (the film never resolves that question) may have the Kaddish said over him and buried with proper respect.  There is a parallel story about the attempted uprising of the Sonderkommandos -- I'm not sure if it was necessary, and it certainly never becomes central or even very well explained.

But that's the point.  Nothing is explained.  No one makes sense of anything, because this is a world without sense.  Instead of pre-empting your peripheral vision, like the Cinerama screen, director Lazslo Nemes has chopped off your peripheral vision with the use of the square format picture.  In its place he has given you super hearing, but what you can hear is chaotic and untranslated, and is mostly of little help, being its own source of confusion and terror.

And so, by cutting off your senses and forcing you to try and piece together what is happening, Nemes has provided much greater immersion than Louis DeRochemont's gigantic Cinerama experience.  Which is just the kind of paradox that a filmgoer has to love.

See Son of Saul even if you're fed up with Holocaust films.  I promise you, you will not be bored for one single solitary second.