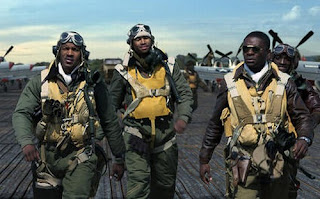 There has long been a need for a large-scale Hollywood production to tell the story of the Tuskegee Airmen in battle, completing the story begun in HBO's film.

Red Tails (2012) will have to serve as a placeholder until that film arrives.  It's not bad, and if you're an aerial combat movie fan, I'm sure you'll get your jollies.

Clearly, the script was written for a Stanley Kramer super-earnest aren't-we-good-liberals production of 1956.  Some actual quotes:  "Experience is a cool teacher, gives the exam first and then the lesson."  "We have a right to fight for our country. The same as every other American."

Mind you, somebody got paid to write that.  I checked my watch to make sure it was still 2012.

Did I mention there were snarling blonde Germans with big facial scars?  And Cuba Gooding smokes a big fancy pipe which has the double purpose of reminding you of cliched air force officers in other movies and relieving Mr. Gooding from having to come up with a character.

The worst thing about the CGI, especially in a movie produced by George Lucas, is that it does not adhere to the George Lucas rule of technology props -- they must not look like you took this stuff straight out of the box.  Remember how beat-up the Milennium Falcom was?  Made it more believable didn't it?  The planes in Red Tails look like they were made by Aurora, not Boeing.

Bryan Cranston is showing up in movies lately like that jerk who got himself in the picture for every club in the school yearbook.  Note to producers -- Cranston is good, but there are a couple of other good actors in the movie business.

John Wayne would be disturbed by the predictability and cliche of this movie.  Buy the Blu-Ray pack, take out the History Channel documentary Double Victory and throw the rest away.
Posted by Lockhart at 4:32 PM