Kicking history when it's down 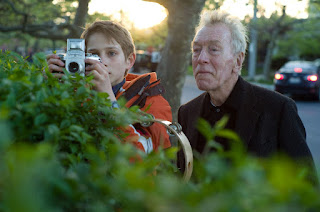 It is difficult, observing the rules I have set for this blog (and which I often traduce), to limit myself to observations regarding Extremely Loud & Incredibly Close (2011) and not to make judgments or to make silly jokes with the title, which, in my opinion, is just ASKING for it.

Everybody has to stop taking for granted how great Spielberg is with kids.  From the evidence of this movie, it's not easy, and this is from Stephen Daldry, director of Billy Elliott.  It's not just that the child character is irritating as conceived by the writer, he's irritating in practice.  No wonder his mother lets him roam around the city without supervision.  Anything to get him out of the house.

Second, making Max von Sydow a mute character just means you're too lazy to come up with a reason why this man has a funny accent.  Von Sydow has a beautiful and expressive voice.  There are a million better non-verbal actors than he.  I guess everyone was just thrilled with the novelty of von Sydow not speaking in English or in Swedish, and thought they were some jam-dandy acting.  He's not bad, but as a student of silent film, I've seen a lot better.

Third, dressing up an empty shaggy dog story with a great national tragedy does not give it significance -- it reduces its significance.  Having the boy's father die in the Twin Towers adds utterly nothing to the story; the only thing that matters is that he is dead.  The oblique visual suggestion that he died plummeting from the building just adds a forsting of grotesquerie onto a big Bad Taste Cake.

I recognize that this is a very weak blog entry, but I literally had trouble keeping my eyes on the screen and resisting the desire to look away and do something else.  A movie that is almost successful, though not quite, can sharpen one's powers of observation.  Something this wide of the mark seems to dull the senses.  Sorry.
Posted by Lockhart at 11:29 AM