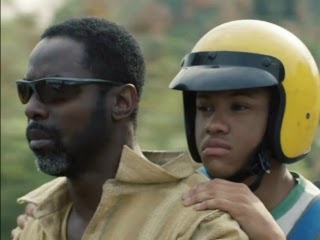 This might be wishful thinking, but I think I am detecting a mini-trend in films that eschew dialogue, at least as a means of conveying narrative information.  Even in some fairly talky films, what seems to be important is who is talking to each other and why, not whatever it is they're saying.

I'm not talking about the obvious examples such as The Artist or Biancaneves, which aspire to an earlier form in a self-conscious way, but the stripping away of dialogue in order to arrive at deeper narrative revelation that words can cover up.

Exhibit A:  Blue Caprice (2013), an abstract fictionalization of the 2002 Beltway sniper incident.  Although there is a soundtrack, it is one of the most profoundly silent movies made in the last few years, both literally and metaphysically.  It seems to have infuriated many of the critics that the film offers no explanation or motive for the violence this would-be father-and-son team inflicted.  But really, what explanation would be possible?  The point of it WAS motiveless crime.  It's even sketched out by John Muhammed (played by Isaiah Washington) in those very words.  What makes the crimes insoluble is their sheer motivelessness, their lack of connection and lack of predictability.  Go ahead -- you explain that.  Irrationality is the heart and soul of the act.  So the film is built on a spiritual silence as to what these acts mean or what their purpose is, a silence it never ever breaks.

C'mon kids, artists are not here to explain.  They are here to observe, to re-interpret and re-present the world back to us.  Judgments are for the audience, not for the artist.  You want an explanation for terrible violence? Check out the psychiatrist scene in Pyscho.  Boring.  Meaningless.  Just there to give everyone a chance to calm down from all the screaming before they leave the theater.  Explanations don't belong in movies.

But there are even more profound and localized silences around the deaths in Blue Caprice.  The first on-screen shooting incorporates a visual misdirection and an audio clue that the shooting has begun.  As one victim passes into oblivion, an oblivious shopper goes by with her cart.  The placid surface of the carpet-like grass disturbed by the incongruity of a snowblower.  The rampage is represented by the sounds of police calls playing asyncronously against shots of police cruisers and pictres of crime scenes.  The arrest itself is literally silent as far as the film is concerned, since it takes place offscreen.  And once that arrest happens, Muhammed disappears utterly (and silently) from the film, and his "son" Richmond's only utterances are to confirm his intention to maintain his silence.

Critics seemed to get downright angry about this film.  Why wouldn't it explain the roots of gun violence, they said?  What is it avoiding?  But the film is not about gun violence -- it's about psychological violence.  The child abuse of a man who picks up a drifting boy and turns him into an emotionless killing machine, seeking only the "father's" approval for a well-aimed shot.  Sorry -- no socio-economic, legal, policy explanations behind this tale, just complementary illnesses.  The film portrays the very lack of affect that makes such crime possible -- which is its strength and the very reason the professional opinionators and verbalizers are uncomfortable with it. 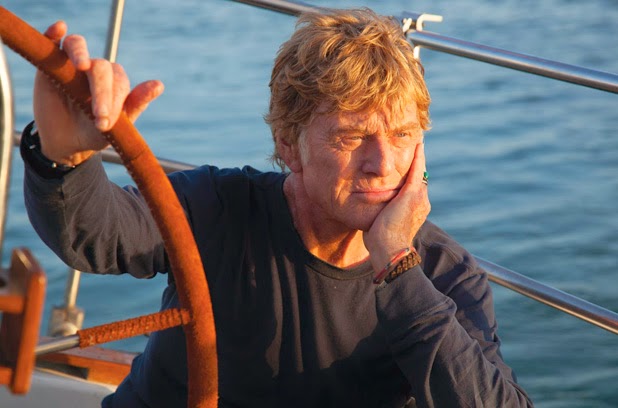 Such chilliness would have been anathema to Hitchcock, who I suspect would have loved All Is Lost (2013), given all its very deliberate limitations.  For one thing, Redford's virtually wordless turn is the kind of eloquent, expressive performance that places him alongside Hitchcock favorite James Stewart, as well as Gary Cooper and Clint Eastwood (the latter two nearly always better when they're not talking.)

Paradoxically, the film was built as an explanation for a brief letter that writer-director J.C. Chandor wrote in the earliest stages of creation.  It was an apology and a confession.  As he read it, Chandor realized that this imaginary farewell was built on the unspoken question, "How long is hope reasonable?"  Here is the text:


13th of July, 4:50 pm. I'm sorry... I know that means little at this point, but I am. I tried, I think you would all agree that I tried. To be true, to be strong, to be kind, to love, to be right. But I wasn't. And I know you knew this. In each of your ways. And I am sorry. All is lost here... except for soul and body... that is, what's left of them... and a half-day's ration. It's inexcusable really, I know that now. How it could have taken this long to admit that I'm not sure... but it did. I fought 'til the end, I'm not sure what this worth, but know that I did. I have always hoped for more for you all... I will miss you. I'm sorry.

Other than the sentence in the middle about "soul and body" and "a half-day's ration" nothing in this sentence calls for a story about a man lost and alone at sea.  Which is what makes the nit-picking about the safety details of this film so ridiculous.  (So what if the man had had an "EPIRB."  Then he either gets rescued or the EPIRB is somehow made non-functional.  Narratively or emotionally speaking, what has been added by attending to such a detail?)  It is a real boat and not a real boat.  It is the Indian Ocean and not the Indian Ocean.  Our Man is a real man or not.  They are both at once.  It doesn't matter.  This is a metaphysical journey from hope to reality and the necessity of letting go.  The subject itself is profoundly silent -- it lives at the core of the soul and not subject to debate or persuasion.  It is a feeling question, and therefore perfectly suited to film.

It is about accepting failure.  It is one of the most painful movies ever made.

It is wordless but not at all silent.  Wind, water, the creaks of the boat, some expletives.  But mostly wind and water.  And pictures of a man thinking.  He thinks deliberately.  He moves slowly, with purpose. No panic.  No false hope.  Reasonableness.  Reasonableness defeated.

Two "silent" films -- one cold, the other cool, both warming themselves at the glowing hearth of the origin of film -- pictures in motion, without the intervention of theatrical chatter.  "Look at this" says Film.  Don't measure it, don't judge it.  At least not yet.  Just look, then look closer.  Only see.