I went to the woods because I wished to live deliquescently...

So in comparing The Kings of Summer (2013) with Not Fade Away (inevitable because, not only are both first features by refugees from television and both are male coming-of-age stories, but Not Fade Away is the film I saw immediately prior to this one), I must address the age-old critical dilemma -- is it better to aim high and fall short or to have more modest goals and achieve them?  Because Kings of Summer lands with an assurance in its off-kilter humor and a skepticism toward its central character that Not Fade Away can not manage, still nursing 50-year-old resentments and injuries.

But Kings of Summer knows that we grow and change and has the preciense to reconstruct our larval selves with an ironic and skeptical eye that renders the vision more accurate than Chase's precise recollection of every fight, every betrayal, every abandonment.  But Chris Galetta, the writer of Kings and its director, Jordan Vogt-Roberts, knows that those clashes that formed the crucible of our character are long forgotten, plastered over in our memory by the sheer pleasure of having survived it all and having become who we are.

This is a great example of how you can be less realistic and be more true.  Early in the story, best friends Joe and Patrick acquire a completely unexplained mascot, Biaggio, who provides much of the energy and variety of the piece.

As played by Moises Arias, likely to become a significant comic personality, Biaggio proves to be the glue of unasked-for, unearned loyalty and affection that holds the boys and the film together.  Biaggio is ridiculous, he resembles no actual human being who lived and yet there is an essential truth to both his weirdness and his steadfastness that no character in Not Fade Away can lay claim to.

But finally the difference between the two films is that Chase has still not left television.  His film is made up of pictures of people talking (to use Hitchcock's phrase) and dialogue is the key to understanding the characters and their relationships.  Chase does not even demonstrate much skill in staging and the use of space to delineate his ideas.  He wisely puts his rebellious teen across the yard in a grey-looking barbecue scene, but proceeds to break up the scene in a set of reverses that obviates any relationship between Alienated Youth and the family trying to act out a scenario of happiness. 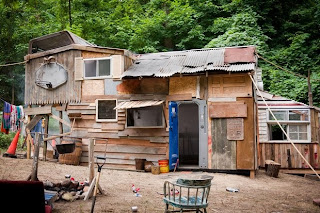 The Kings of Summer is all about control of space.  The boys want to escape their parents' spaces and create a new one of their own, the house they build in the woods out of scrap that provided the original name for the film -- "Toy's House."  Instead of imitating their parents lives, like the frustrated and frustrating teens of Chases's film, Joe, Patrick and Biaggio try to reinvent life from first principles.  Sadly, both films revert to the Yoko trope, the Girl Who Wrecks Everything.  In fact, in both cases, the girl in question has been with multiple boys in the band, real and metaphoric in the respective films.  But Kings of Summer doesn't even need that idea -- it seems merely a device to create a separation between Joe and Patrick.  Joe takes command of the space by himself and defends it against the ultimate Edenic intruder, a poisonous snake, defending girl, father and almost Biaggio, who inserts himself in the snake's path to his regret.

At the end of both Not Fade Away and Kings of Summer there is a supporting character in the hospital.  In Not Fade Away he provides a small plot development, pushing the hero to the West Coast by himself (reinforcing the narcissism of what is supposed to be the identification figure).  In Kings of Summer, Biaggio finds himself under medical care due to a heroic if misguided gesture that resonates with the central themes of the film.  But Mr. Galetta's and Mr. Vogt-Roberts's craftsmanship and emotional logic are far more impressive than that of the famous, grouchy and evidently self-absorbed David Chase.

BTW -- are Nick Offerman and Megan Mullaly now the center of the Six Degrees of Separation game?   They are becoming ubiquitous lately.  I think Nick Offerman has appeared in more movies this year than Bryan Cranston, which is saying something.  (Incidentally, he's just fine, although Mullaly is a bit cartoon-y, as is her wont.)

Finally, I can recommend Kings of Summer to any women who want to understand men of any age in the way it lays out that the specifics of that narrow passage from adolescence to the beginning of adult life.  That is truly news you can use, if you have males in your life.