Surprises from the pre-classical era 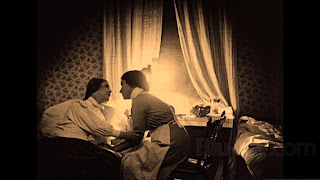 I've only just gotten around to The Phantom Carriage (1921) which has been rediscovered and hailed as an early landmark of Swedish and of silent cinema.  As for the content of Victor Sjöström's remarkable and haunting film, I don't have anything to say beyond the reams that have been written, either about the contemplation of death-in-life, nor about the impeccable in-camera double-exposure effects that seem incomprehensibly impossible before the advent of the optical printer.

But it is always a pleasure to see films made before styles and studio procedures were set into the hard expectations of the market and of genre itself, which is one of the principal rewards of early silent cinema itself.  The filmmakers were still working out the rules, syntactical, stylistic and commercial.  And one of the issues that most concerns the producers and exhibitors is making sure that the actors are clearly visible at all times, so that the audience knows that they're seeing the people they paid to see.  This is no concern of the filmmaker, who is driven primarily by narrative (which is not the same thing as plot or story).

So look at this still, which (unlike many production stills) is an accurate reflection of this scene in the film.  The low and partially obscured light source perfectly sets the hushed, anxious yet warm tone of the scene.  Is there any question that this is a deathbed, albeit not a frightening one?  This is the deathbed of a person who is lived well and wishes to die well.  The light is neither evenly balanced, as Classical Hollywood would demand, nor is it dramatically expressionistic, as in Citizen Kane and its film noir offspring. The effect is oblique, but not in overstated way. The light throughout Phantom Carriage is rarely realistic, yet it often seems that it is, because--although it is NOT expressionistic--it is highly expressive of the inner states of the characters.  A photographer like Julius Jaenzon becomes a true co-author in a work like this, especially in silent film, in which dialogue is not a significant factor.

Students and even devoted film lovers are always resisting silent film, perhaps sensing that it requires closer attention and is therefore, harder work.  But without a stream of chatter, sound effects and music closely synchronized to the image, the viewer is forced to shut up and look.  And when it comes to film, the pictures, there's where the goodies are.
Posted by Lockhart at 11:44 AM