Anderson in the ascendant 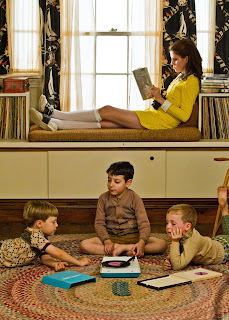 The signature Anderson shot is what I call the Dollhouse shot, in which Anderson's camera roams through divided spaces to show how they are connected (and how they are on a set, which has an anti-realistic effect).  I first noticed it in Life Aquatic, and Mr. Fox is full of them.  But Moonrise Kingdom begins with one. (The picture on the right is a set photo from this sequence.  It is really a photo, though when reproduced in a small size it really looks a Rockwell for the Saturday Evening Post.) I am reminded of how Alfred Hitchcock found it necessary to put his own cameo earlier and earlier in the film so as to get it over with and leave fans undistracted to follow the film.  In Moonrise Kingdom it may have the same function, as well as being a somewhat defiant setting of tone.  "This IS a Wes Anderson film!  You know what that means, and I'm not going to apologize for it."

It is a little appalling to see so many critics jump on Mr. Anderson for having a distinct style.  That doesn't seem to bother them with Hemingway or Faulkner or Dickens or Flannery O'Connor or Raymond Carver.  It doesn't bother them with Hitchcock or Welles or even Spielberg, who has a very particular way of using his camera.  But because Anderson uses conventions from other media, including the fine arts, illustration and the theater, the critics are all jumping up and down and turning blue!  How dare he have a distinctive voice!  All the really good directors are anonymous journeyman utterly without any element of personal expression.

There is a reason critics get excited this way.  They are all Salieris.  Third-rate uncreative nonentities, fully aware that the subject of their scribblings will far outlast those scribblings.  They are also mouth-breathing, knuckle-dragging morons.

From this categorization I separate the valuable journalists and historians who deal in fact, like David Bordwell and Kristin Thompson.  These are the kind of film writers who literally count frames.  Some writer who is obsessive in just that way should tell us if Wes Anderson has ever done a push-in with his camera.  The camera always seems to move laterally, and when there is movement in depth it seems to progress in a straight line from the horizon line toward the viewer.  There are no diagonals in Andersonland, and there are no dolly movements in towards the actors.  Too emphatic, perhaps?  Or maybe the Coen Brothers used up the quota of push-ins before Mr. Anderson could get to them.

Two things Anderson gets right that few filmmakers do.  One is very early love.  There is a wonderful mix of narcissistic unawareness of one's actions and their possible consequences and self-conscious detachment in that first fine fall into passion.  At the same time a person is engaged in headlong and reckless acts to pursue the object of passion, one is also aware that First Love is a landmark in one's life and should be observed and considered.  And one can't help wondering if one is doing it right.  Anderson and his young actors get that spot on, doing insane things and analyzing them in an overly sane way.

The other thing is the 1960s.  Most filmmakers visiting the 1960s seem to believe that 1968-1973 was when the 60s took place.  Mad Men has corrected this impression to a great extent, and yet the tone is still off in many cases.  Few things evoke the 1960s so well as the battery-operated phonograph playing a 7" 33 RPM single from Europe, and the single is by a name forgotten to all but a few of us over 50, Francoise Hardy.  That is not an exercise in obscurity, but in precision.  Also, I can't help but be delighted to hear Leonard Bernstein's recording of The Young Person's Guide to the Orchestra with narration read by young Henry Chapin (plus a snippet of Carnival of the Animals), a recording my son used regularly to fall asleep to during one early phase of his life. 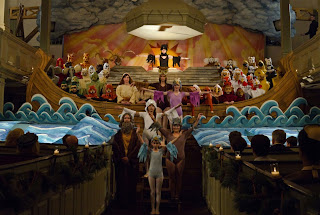 [On the other hand, I have to admit to being embarrassed that, as a big fan of Benjamin Britten, I was unfamiliar with Noye's Fludde, the excerpts of which sounded wonderful.  Also, it looked great in the film.  Here's a picture of it on the right. I have resolved to hunt a recording of that work down.  Britten also provides the best underscoring cue in the film, a string pizzicato melody from the Simple Symphony, another piece unfamiliar to me.  Seriously, I know a lot of Britten's work very well, but he was quite prolific.]

Noyes Fludde reinforces the film's mythic and fable-like qualities.  To the critics who find this arch, I would direct them to Homer and the Bible and see if those aren't a little non-realistic as well.

Also assisting the period feeling of Moonrise, there's the color. At least in the print I saw, the film looked as though it had been shot in the 1960s on Ansco Color which had since gone a bit green.  Hard to say why, but it helped.

We didn't realize it 15 or 20 years ago, but what cinema needed was more Bob Balaban.  Glad to see Anderson doing his part to correct this problem, and made him omniscient, as is only right and proper.

Is this the first major commerical feature shot made entirely in Rhode Island?  Having summered in Maine throughout my childhood, I can't tell you how familiar and comfortable much of the film looked.  It is the cramped shabbiness preferred by members of the meritocracy.  (See also On Golden Pond.)

Here is a very nice video about Britten's opera I found at the website of Focus Films, distributor of Moonrise Kingdom.  It is quite engaging and I hope it makes up for this very dull post about a very lively movie, which you should see especially if you have ever been in love, or a child or outdoors in the rain.