Revisiting the pre-verbal pleasures of film 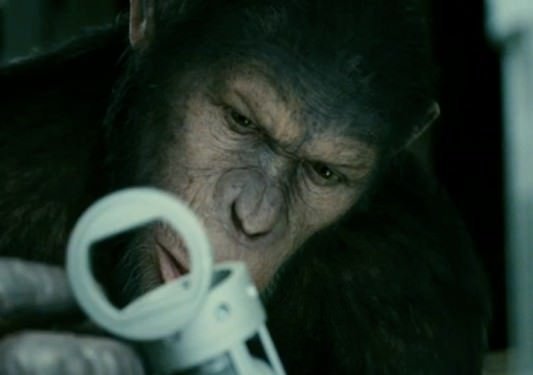 The triumphant march of The Artist (2011) through the 2012 award season only highlights what I see as an emerging trend in film around the world, a rediscovery of the delights of the pre-verbal aspects of film. I use the term "pre-verbal" advisedly. Just as a black-and-white film should not be defined as a film which lacks color, a sequence which relies on cinematic tools other than dialogue need not be defined as "silent" or even "non-verbal" which connote that something has been removed.

To a great degree, film speaks to the limbic brain, the center of emotions. The best films are not illustrated scripts, but images (and often sounds) arranged in time so as to suggest cause-and-effect relationships among human events which trigger emotions in the viewer. Movies do not make $200 million and make year-end best lists by having either well-organized data or elegantly artistic designs. We want them to move us, and for that, filmmakers, especially those who have taken the trouble to steep themselves in the canon, have found the Land Before Talk Began.

Hugo (2011), for example, is the first 3D movie in the current post-Avatar wave which is likely to be looked at 50 years from now. (I suspect that Avatar, as good as it was, will retain interest only as a historic landmark, as its technological achievements will soon be surpassed.) Not only does it earn a permanent place as a Scorsese film and as a unique celebration of the great Georges Melies, but it uses the 3D toolkit in an almost indispensible manner in telling its story. At its heart, Hugo is an investigation, a delving into. And whereas 3D films of the 1950s were about things popping out at us in the post-war America of abundance -- paddleballs, hubcaps, breasts -- Avatar taught that 3D is even better at delving inside a world, at entering it in depth and exploring all around it. Thus, Hugo keeps penetrating deeper and deeper into long-held secrets, with an extra overlay of clockwork mechanics which also benefit from the sculptural plasticity leant them by the 3D format. It doesn't hurt when 3D is put to work enhancing the hand-colored exuberance of Melies own work in the delightful finale.

On the other hand, the pre-verbal work of Tree of Life (2011) seems to infuriate more film fans than it delights. This film has been attacked far and wide by the people Lenny Bruce used to call the "whats-it-mean"s; the people who cannot enjoy anything unless it has a clear explanation. These people curl up into a fetal position in the face of the ambiguous, let alone the wholly ineffable. Unless there is a planned program of meaning, like a bad Stanley Kramer movie, they stamp their feet and threaten to turn blue until you bring them The Help. (I didn't mind The Help, but did anyone have the slightest doubt of either its intended message or its eventual outcome at any point?) Tree' s two central characters, son Sean Penn and father Brad Pitt (how I wish there were photos of a family reunion) are both singularly incapable of significant verbal expression. (Reportedly, this only happened to Penn's character during post-production, when his long verbal exegeses were excised.) So the audience must read between the lines, and go back to studying faces, postures and tics in order to "read" the real dialogue beneath the words.

And in a manner recalling the days of Douglas Fairbanks, who appeared to do wonderful stunts because he had a certain energy and grace plus sets designed to his exact physical specifications, Mission Impossible - Ghost Protocol (2011) delivers some marvelous treats for the eye not limited to falling down the face of a large skyscraper or blowing up part of the Kremlin. My favorite sequence has to be the deranged 3D-pinball-intricacy of Tom Cruise caught in a car elevator system like a malevolent round of Plinko. In fact, to recall MI:GP is strictly to remember the visuals -- there is not one memorable line of dialogue in it -- not even a snappy catchphrase, and I would be willing to bet you could follow the action completely with the sound turned off. Let's try it when the DVD comes out.

Even a film which should qualify as a conventional egghead-arthouse-international-politics movie like Incendies (2011), based on a play about a family torn asunder in the turmoil of the Middle East (are you bored yet?) is brilliantly realized by the filmmaker's decision to hack away at the dialogue original play and substitute the expressions of the actors and a wealth of visual metaphor, not least the film's entire key -- or MacGuffin depending on how you look at it. It even has the courage to play out lengthy scenes in unsubtitled foreign languages, relying on the audience's ability to read the visuals.

Even The Artist itself relies on its pictures uncontaminated with chatter to pull off two of its most telling and moving scenes, as we see each of the major characters fall in love. For Peppy, it is the scene in which she caresses Georges's tailcoat substituting her arm for his in the sleeve, caressing it and speaking with it in a way that would be ludicrous in a "talkie" but is poetic in its silence. Similarly, the dancing scene with its multiple spoiled takes gives us a man who literally cannot let go of a woman in a sequence that could have been irritating had we been compelled to hear the same dialogue and/or music over and over, but which is singularly charming as Georges "breaks down" before our eyes, helpless in his infatuation.

And then there is the very literal pre-verbal developments of Rise of the Planet of the Apes (2011), which I had avoided in the theaters because it looked like another lunkheaded CGI-fest, but which is instead a powerful metaphor of colonialism and racism, the only Apes worthy to stand next to the original (and superior to it in my own view). Here the acquisition of language means acquiring power and status, but that does not invalidate the dignity of the apes as they were before language: they always had dignity and strength--the language is merely the instrument that allows them to communicate that to humans. In fact, the downfall of the humans was their inability to read pre-verbal communications. I'm kind of looking forward to the subjugation of the arrogant literates in the next film. And I know that's weird for an English teacher, but then film itself really has no business being taught by an English teacher.