Reality and its alternatives Exit Through The Gift Shop (2010) is not only a contender for Best Documentary at the Academy Awards this Sunday, but is being hailed as re-writing the entire concept of documentary, of being a complete breakthrough in the form.

I can only conclude that the people who write this sort of thing don't see many documentaries. The novelty of Exit is that a documentary was begun on one subject, but the effort was diverted into a different direction. This happened to Errol Morris, who began a film on "Dr. Death", James Grigson, an "expert" whose testimony was always tied to death penalty prosecutions. This led him to the story of the wrongful prosecution of Randall Dale Adams, and Morris's Thin Blue Line helped secure Adams a retrial and acquittal. Les Blank intended to create a "making of" film about Fitzcarraldo, but his resulting film, Burden of Dreams became about how the director, Werner Herzog turned into the victim of his own obsessions, and wound up being more interesting than Fitzcarraldo.

The point is that real documentary filmmakers change course all the time, because the footage dictates what the film will be. (Television documentaries are an exception, as they are tightly controlled and budgeted and may even be shot to a script.) No one is surprised when a novel or play turns out differently than the author intended, but somehow this is radically startling in documentary film.

Exit is a little different in that it is not clearly established who is controlling the film. There is no director, although one has to suspect Banksy, the renegade graffiti artist, as the guiding hand. The film was originally intended to be a portrait of Banksy and his work to be shot and directed by an indefatigable video shooter named Theirry Guetta, who in time aided and abetted street artists in their technically illegal pranks. Guetta shot a great deal of high-quality material but delivered a film that was an incomprehensible non-narrative stream of flash cutting; interesting for a few minutes, but headache-inducing thereafter. Banksy decided he needed to seize control of the project and suggested that Guetta himself became an artist.

Guetta evidently became an artist the way a film producer does -- by hiring people to execute his vision, and trying to assemble it into a gallery show in imitation of Banksy. Even though it was unoriginal and organized in a slapdash fashion by loyal employees who realized that Guetta was incompetent or distracted, it became a huge hit and Guetta is today a successful "artist."

It is hard to say what any of this means. That genuine grass-roots creativity can be seized upon by entrepreneurs and transformed into product? That street art is itself a hoax? Or that it is both art and hoax at the same time? In any event, none of these revelations are earth-shattering, nor is any of the filmmaking. It is a perfectly good assemblage of what was reportedly a staggering amount of unsorted footage, but it does not write a new chapter in documentary. The most remarkable thing is what a charming impression Banksy makes, though his face is obscured and his voice distorted throughout. 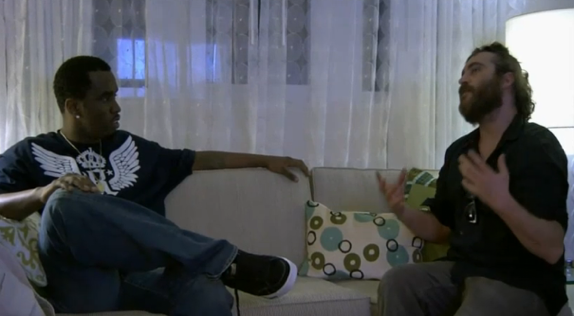 e that it's story is a fake. It's both too credible and too eccentric to be fake. For an example of a fake story in a fake documentary, one can turn to I'm Still Here (2010), although I don't recommend doing so. This was the film around which Joaquin Phoenix and director Casey Affleck concocted the fabricated story that Phoenix was retiring from acting in order to become a hip-hop artist, despite never having displayed any talent in that direction prior thereto. The entertainment news media reacted with the hoped-for consternation, while David Letterman managed to have some fun at Phoenix's expense. That encounter proved, among other things, that Phoenix lacked the ability and experience in improvisation that might have made this experiment work. This is the kind of thing that Christopher Guest or Harry Shearer or somewhat of that ilk can carry off without batting an eye, but Phoenix was clearly stumped. (He even felt the necessity to apologize for this appearance a year later, but he should have apologized for the film as well.)

The problem is that Affleck and Phoenix not only lack the skill, but the courage and conviction to pull this idea off. There is a choice here-- one can either use the documentary form as a narrative frame and style within which to construct a fictitious world and story, as in The Office television series, This Is Spinal Tap and the rest of the Christopher Guest movies. Or one can commit completely to a prank (see Banksy above), as in Candid Camera, Punk'd and Pauly Shore's entire career. But the makers of I'm Still Here tried to have it no way and both ways.

Phoenix's character (also named Joaquin Phoenix, but clearly not the real Joaquin Phoenix) is surrounded by flunkies and sycophants who humor him in his insane whims. But they are not real flunkies and sycophants, but people associated with Phoenix and the film who are in on "the joke." Similarly, Sean Combs (appearing as "P Diddy") was made aware that Phoenix's hip-hop pretensions were not sincere, and he also lacks the acting chops to simulate the real confusion and horror that he would have felt upon being presented with Phoenix's incompetent creations to "co-produce." So the whole "fly-on-the-wall" and "catching people's candid reactions" only applies to Phoenix's recorded media appearances, which show up in clips in this film. In all the original footage shot by Affleck, the fix is on.

Even this might have been worthwhile if the film said anything or had anywhere to go. What it tells us is that celebrities are spoiled babies and have no idea what they're actually good at and why, and need people who will help them, not enable them. This is hardly worth sitting through 108 minutes -- yes, you read that right, over one and three-quarters hours, to find out. (At best they had about half the content they needed for this movie.) Anyway, I sat through it so you don't have to. You can leave your thanks in a comment below.
Posted by Lockhart at 9:27 AM