No doubt, not reasonable 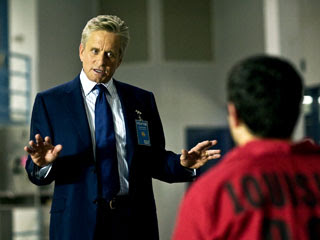 There is no point in addressing the aesthetic qualities of Beyond A Reasonable Doubt (2009). It has none. The only question is, how does such a thing happen? How does a film based on a prior film by the master Fritz Lang, starring Michael Douglas and written and directed by the solid journeyman Peter Hyams devolve into an utterly meretricious piece of tripe?

My guess is that the project begins with Ted Hartley, an ambitious entrepreneur who has acquired remake rights to a number of RKO properties. This always seemed to me a sensible idea for a business. We all know that remakes of recognized classics is pointless, and only likely to expose the perpetrators to ridicule and scorn. But there are tons of movies out there that are good, or almost good, and only need some slight change to have moved up into a higher class of film. How many movies have we seen that are going along well and then crashed and burned in the last half-hour, the last ten minutes, or even the last minute? It's not uncommon.

So making a new twisty thriller based on the somewhat implausible premise of a journalist placing himself in jeopardy of prosecution in order to prove that a corrupt prosecutor is using fabricated evidence is not a hopeless idea. But clearly he had trouble interesting young A-list talent in developing this idea, and it fetched up at the door of Peter Hyams, writer-director of Outland (a disguised remake of High Noon), The Star Chamber (starring Michael Douglas), The Presidio and 2010, a workaday sequel to the epic 2001. So although Mr. Hyams is not perhaps a startling or original artist, he has a decent track record with building borrowed ideas and well-known stars.

Here is probably where things began to break down. The modern audience will not stand for the simple complication that the plan will not work. That is obvious from the start. It's an idiotic idea--the film virtually admits it--and there is no chance it will work as planned. Here's the rule -- the plan only works if they don't reveal it to the audience. The corollary is, of course, if they tell the audience the plan, it will go wrong.

So some additional twist is required. And I will give you the spoiler, because you really shouldn't waste your time watching this movie. The journalist is actually guilty. Not only does it make the whole premise of the story ridiculous, not to mention tasteless, it makes the audience feel like a cluck to have sat through a story about a criminal who engineers his own prosecution.

There is already a very good film about an innocent man who engineers his own prosecution, called The Man In The Glass Booth, based on the play by Robert Shaw. But he doesn't want to foil his prosecutors, he wants to have someone publicly admit and be publicly punished for the genocide of the Jews. He willingly sacrifices himself to redeem humanity.

Beyond a Reasonable Doubt doesn't redeem anyone. Amber Tamblyn does a decent job, and one supposes that she wanted to be seen playing a young professional woman who is capable of an adult romance, in order to break her out of the teen ghetto she was in because of her starring role on Joan of Arcadia. Jesse Matcalfe was probably happy to get a lead more demanding than the "sexy lawn boy" on Desperate Housewives. Orlando Jones does a nice job of straight acting as an honest cop, so that makes sense. But who was blackmailing Michael Douglas? Was he that hard up for work? Or needed to get out of the house? His role is not only cardboard-thin, completely unrewarding and extremely similar to a number of sneering, big-shot, scenery-chewing performances he's done before. And it was doubtless his "yes" that got the film a green light. So he is to blame in more ways than one.

Some failed films probably looked pretty good on paper and fail in the execution. This story and script must have been DOA, and yet it went ahead. With all the children going hungry and diseases to be cured, people spent time and money to actually make the film. That's a mystery.
Posted by Lockhart at 1:45 PM