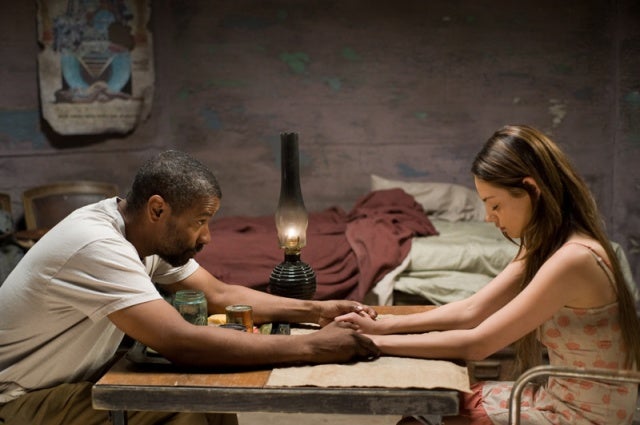 As I write this post, the second sperm-donor-comedy is opening in theaters. (The Switch with Jennifer Aniston--don't look forward to a post about it.) The Book of Eli (2010) opened earlier this year as the second post-apocalyptic road movie, after The Road. Next to The Road's stripped-down elemental narrative of survival, The Book of Eli, with its action staging, dynamic protagonist and twist ending feels like Mad Max Goes to the Twilight Zone.

All of these films owe something to Sergio Leone, who took the vast and varied space of the American West, so dramatic and poetic in John Ford and turned into a blasted heath for an army of angry Lears to rail on. Strong, reticent heroes, reluctant to turn to violence until absolutely necessary, like Gary Cooper and Randolph Scott gave way to gun-toting sadistic psychopaths. For Washington and company, it's shoot first and ask questions later, strange for a character whose chief function in life is to safely transport a copy of the Bible. Sure, we had bible-thumping psychos before, most notably Robert Mitchum in Night of the Hunter. But he was the villain and an obvious hypocrite. Denzel is a sympathetic hero.

And what's with the religion thing? In a John Ford western, the church and the schoolhouse arrive with womenfolk, the end of the frontier, and the beginning of family life, stability, order. In Eli, the Bible introduces further mayhem, jealousy and covetousness.

The movie is one of those Sixth Sense deals that has an outrageous twist at the end that changes everything that went before it. Sixth Sense played by the rules. A second viewing reveals taht it never violated the story point that was revealed at the end. But although I have no desire to watch Book of Eli again to verify it, I am fairly sure that a number of the events and scenes in the movie are impossible or at least ridiculous in light of the final story twist.

It's not surprising given that this is also one of those movies that is so extensively treated in post-production--color drained, background elements CGI-ed in, that nothing in the film can be believed or trusted. And that is what is most disturbing about the fantastic possibilities of post-production CGI--nothing can be trusted, nothing can be relied on. If live-action film becomes no more convincing of its own reality than a fully-animated film, then why bother with it at all?
Posted by Lockhart at 12:36 PM